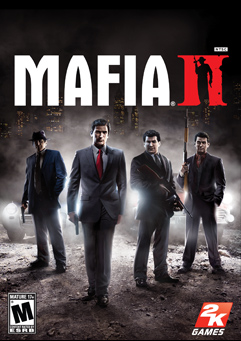 From the developers of the award-winning Mafia comes Mafia II, a beautifully crafted look into the dark and unforgiving world of the Mob.

Expanding upon the original hit that captivated more than 2 million gamers around the world, 2K Czech takes players deeper into the Mafia with a mature and compelling narrative that will immerse players like never before.

Powered by the all-new Illusion™ engine, built specifically for Mafia II, players will experience the true evolution of the Mob game that defined a genre. Gunfights, hand-to-hand combat and vehicular exploration feature new depth and dimension that allow players to experience the world of Mafia II in a way that will keep them coming back for more.

•Gangster-Movie Experience: Through strong, authentic characterization and compelling narrative, the mature storyline will make you understand the pull and impossible escape of life in the Mob Empire City’s Lush Authenticity Breathes Life into the Golden Era of Gangland America: Discover the beautiful and breathtaking world of Empire City and explore a dense and vast landscape filled with skyscrapers, landmarks and residences that reflect the style of America’s most recognizable cities

•Action-Packed Gameplay: Take part in heart-stopping car-to-car gunfights, white-knuckled hand-to-hand combat and scintillating gunplay, all of which come to life through the magic of next-generation technology

•Music as Environment: Players will be immersed in the Golden Era of America as car and home radios feature tracks from some of the era’s most influential artists