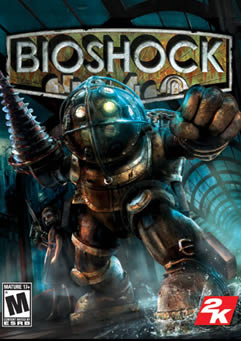 This “genetically enhanced” first-person shooter lets you do things never before possible in the genre.

Turn everything into a weapon, biologically mod your body with plasmids, hack devices and systems, upgrade your weapons and craft new ammo variants, and experiment with different battle techniques.

After your plane crashes into icy uncharted waters, you discover a rusted bathysphere and descend into Rapture, a city hidden beneath the sea. Constructed as an idealistic society for a hand picked group of scientists, artists and industrialists, the idealism is no more. Now the city is littered with corpses, wildly powerful guardians roam the corridors as little girls loot the dead, and genetically mutated citizens ambush you at every turn. BioShock forces you to question the lengths to which you will go and how much of your humanity you will sacrifice…to save your own life.

BioShock is loaded with some of greatest, most modifiable weapons to ever blast their way into a shooter. But guns alone won’t be enough to defeat the devious AIs of Rapture. There are literally hundreds of other strategies players can use to take out his enemies. Here’s just a few things you can do a foe:

• Take control of your world by hacking mechanical devices, commandeering security turrets and crafting unique items critical to your very survival.
• Upgrade your weapons with ionic gels, explosives and toxins to customize them to the enemy and environment.
• Genetically modify your body through dozens of Plasmid Stations scattered throughout the city, empowering you with fantastic and often grotesque abilities.
• Explore a living world powered by Ecological A.I., where the inhabitants have interesting and consequential relationships with one another that impact your gameplay experience.
• Experience truly next generation graphics that vividly illustrate the forlorn art deco city, highlighted by the most detailed and realistic water effects ever developed in a video game.
• Make meaningful choices and mature decisions, ultimately culminating in the grand question: do you exploit the innocent survivors of Rapture or save them?