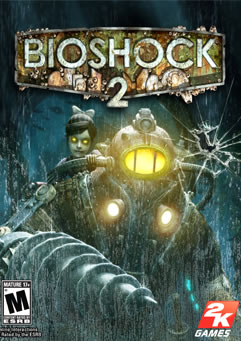 Step back into the unforgettable world of Rapture in BioShock 2.

Set approximately 10 years after the events of the original BioShock, the halls of Rapture once again echo with the sins of the past. Along the Atlantic coastline, a monster has been snatching little girls and bringing them back to the undersea city of Rapture. You are the very first Big Daddy as you travel through the decrepit and beautiful fallen city, chasing an unseen foe in search of answers and your own survival.

• Evolution of the Genetically Enhanced Shooter: Innovative advances bring new depth and dimension to each encounter. New elements, such as the ability to dual-wield weapons and Plasmids, allow players to create exciting combinations of punishment

• Return to Rapture: Set approximately 10 years after the events of the original BioShock, the story continues with an epic, more intense journey through one of the most captivating and terrifying fictional worlds ever created

• You Are the Big Daddy: Take control of BioShock’s signature and iconic symbol with the original prototype Big Daddy, and experience the power and raw strength of Rapture’s most feared denizens as you battle powerful new enemies

• Continuation of the Award-Winning Narrative: New and unique storytelling devices serve as the vehicle for the continuation of one of gaming’s most acclaimed storylines

• Genetically Enhanced Multiplayer – Earn experience points during gameplay to earn access to new Weapons, Plasmids and Tonics that can be used to create hundreds of different combinations, allowing players to develop a unique character that caters to their playing style.

• Experience Rapture’s Civil War– Players will step into the shoes of Rapture citizens and take direct part in the civil war that tore Rapture apart.

• See Rapture Before the Fall – Experience Rapture before it was reclaimed by the ocean and engage in combat over iconic environments in locations such as Kashmir Restaurant and Mercury Suites, all of which have been reworked from the ground up for multiplayer.

• FPS Veterans Add Their Touch to the Multiplayer Experience – Digital Extremes brings more than 10 years of first person shooter experience including development of award-winning entries in the Unreal® and Unreal Tournament® franchise.